What Is Diabetes?
It is termed as a silent disease, which is caused due to high level of blood sugar. Glucose present in the blood is the main source of energy that comes from the different food items that we consume. The pancreas is responsible for producing insulin, a hormone that transfers glucose from the food to different cells of the body to be consumed as a source of energy.

When the pancreas does not produce adequate or any insulin or if the body doesn't use insulin properly then the level of glucose goes high, as it stays in the blood instead of reaching different cells. Having a high volume of glucose in the blood can lead to different problems. It is important to note here that, there is no allopathic medicine available that cures diabetes. But there are different measures that a diabetic person can take to control blood sugar levels and stay healthy.

With this HbA1c Test​ you can easily check your blood sugar levels for the past 90 days. This will help you to determine if dietary changes may be needed. ​Order your kit here! ​(Scroll down a bit on the page to find the HbA1c Test) 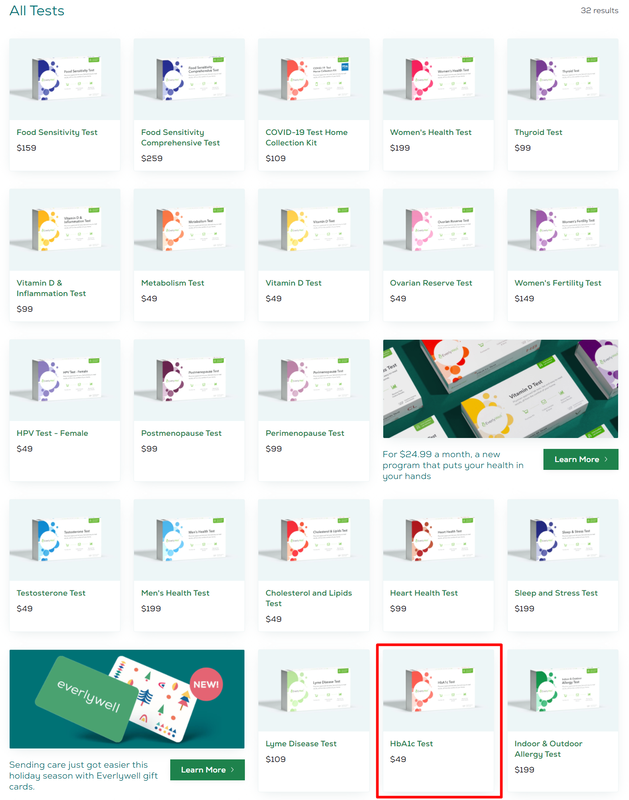 3 Different types
There are three different types of diabetes and every condition needs to be taken seriously and addressed accordingly.

Type I – is known as juvenile diabetes, which takes place when the body loses its natural ability to produce insulin. Subjects of type I diabetes cannot survive without insulin; they take artificial insulin daily.

Type II – is the most common form of diabetes, which has a strong connection with obesity. It usually affects how the body makes use of insulin. In type I diabetes, the body does not produce insulin at all, but in this type, insulin is produced and what happens is that the cells lose their ability to respond properly.

Fibrosis related diabetes and monogenic diabetes are also different types of diabetes that are not common.

Symptoms of Diabetes
Both Types I and Type II diabetes have their symptoms. Let's have a look at them.

Signs or Symptoms of Type I diabetes
​Signs or Symptoms of Type II diabetes
Signs and symptoms of gestational diabetes
What Sort Of Complications Can Surface Due To Diabetes?
A persistently high level of blood glucose can lead to the following problems.
How Is Diabetes Treated?
Subjects of type I and type II diabetes need to inhale or inject insulin so that their blood sugar level remains normal. There are different types of insulin available and they are categorized according to their effectiveness. Some patients use only one type of insulin while others might need a combination of different types of insulin to get the desired results. Too much insulin can lead to side effects like shaking, sweating and nausea due to extremely low levels of blood sugar.

Every conventional medicine has some sort of side effects that is why; researchers are trying to find a natural medicine that can be beneficial for diabetic people. Currently, bee venom is being studied and applied to diabetic patients to check their effectiveness.

Introduction
Type I diabetes usually takes place due to the destruction of autoimmune beta cells, while certain chemical agents and viral infections can also trigger this disease. According to various researchers, the crucial role of insulin is to facilitate lipids, proteins, and carbohydrates. Thus, diabetes can be described as a flaw of carbohydrates, proteins and lipids metabolism due to which the overall body system is affected. Insulin deficiency further leads to a rise in the level of phospholipids, free fatty acid, and cholesterol.

Bee venom consists of a wide range of active amines, enzymes, peptides, and several other elements. According to Son et al., BV and BS (bee venom and bee sting) have a positive effect on the quality of life of people suffering from different diseases, illnesses, and infections. Phospholipase A2 and Melittin are the most essential ingredients of bee venom that play an effective role in generating allergic and irritation responses that lead to analgesic and anti-inflammatory effects.

Due to the high prices and several side effects of chemical-based medicines for diabetes, exploring new natural therapeutic agents, having no adverse effects, has become the need of time. Recently, the percentage of diabetic people has gone quite high, which has further pushed researchers to come up with related alleviative, preventive and treatments. The main aim of this clinical study was to determine the effect of Iranian honey bee venom on the blood levels of insulin and glucose in alloxan-induced diabetic lab rats.

Method
Bee venom was obtained from the beehives through an electric shocker. When honeybees stroke the electric wires and received an electric shock, they at once stung them and released their venom. This process was conducted for 30 minutes nearly and after that, the collecting panel was separated from the beehive and left to dry. Later, dried bee venom was scratched and shifted to a proper container.

Lewis rats, weighing around 200 g, were chosen for this clinical study and were kept in the Darou Pakhsh Pharmaceutical, Iran. Lab rats were subjected to a proper light and dark cycle, which was based on 12 hours each, respectively. The temperature was kept around 23 degrees centigrade and humidity were maintained at 70%. These conditions were constant throughout the experiment. The layout of this research was formally approved by the Ethical Committee of the relevant university.

Alloxan monohydrate was chosen to induce diabetes in the lab rats. It was given intraperitoneally having a dose of 150 mg/kg. It was found that this drug led to necrosis and beta-cells apoptosis. Rats were observed having type I diabetes. Once 72 hours has passed after this injection the, blood sugar level was checked through Acua Check.

Fasting blood samples, to measure the glucose level in the blood, were obtained after 2 weeks of administering bee venom and analyzed through the Stone process. Hematocrit tube was used to collect blood from infraorbital sinus. This method is quite suitable for carrying out repetitive blood sampling, which is required for primary analysis after two weeks of administration. Enzymatic kits were used to determine blood glucose levels.

In the end, animals were subjected to ether anesthesia after sixteen hours of fasting to collect blood samples for analysis. 48 hours after the final injection, fresh blood samples were obtained from the heart and then centrifuged at 3000 rpm for 15 minutes at a temperature of 4 degrees centigrade to separate the serum. The serum obtained was kept at -70 degrees centigrade for biochemical analysis. In the end, the level of cholesterol, triglyceride, insulin and blood glucose in the blood serum were evaluated.

Discussion
In this clinical study, the level of blood glucose increased after administering alloxan monohydrate that destroyed the pancreas B-cells. The level of blood glucose came down after the bee venom treatment. It can be said that phospholipase A2 and melittin might have contributed positively to this action. Explaining further, these components of bee venom play an effective role to counter the inflammation of the islets of Langerhans and help elevate blood insulin level.

Results derived, clearly show that bee venom helps in decreasing blood TG content. This mechanism can be explained as: bee venom administration helps in improving glycemic control and also decreases the blood glucose level. Consumption of glucose is also boosted instead of lipids. Acetyl coA, which is derived from the pyrovic acid, becomes a part of the Krebs cycle that eventually triggers glucose metabolism.

It was also noticed that the cholesterol level went up after administering alloxan while it came down in the group treated with bee venom. Lowering the effect of cholesterol is possible due to its ability to get easily absorbed in the small intestine and promote its hepatic release. The liver plays a crucial role in helping the body get rid of cholesterol through bile secretion.
Source: https://www.ncbi.nlm.nih.gov/pmc/articles/PMC3547303/

Effects of BCG, Lymphotoxin and Bee Venom on Insulitis and Development of IDDM in Non-Obese Diabetic Mice

​Abstract
It was investigated in this experiment if BV, lymphotoxin or BCG can help prevent insulitis or development of diabetes in the NOD (non-obese mice). To conduct this experiment, a manifestation of diabetes and intensity of insulitis was evaluated in the 96 NOD and 24 ICR mice. The NOD mice group was randomly assigned to the control, BV, LT- and BCG-treated groups. LT was administered 3 times per week for a period of 4 to 10 weeks and BV was administered only once after 6 weeks.

BV was administered in two weekly doses to a period of 4 to 10 weeks. It was observed that the symptoms of diabetes surfaced in the control group after 18 weeks, in the BV and LT treated group after 23 weeks and in BCG after 24 weeks.
Aggravating episodes of diabetes after 25 weeks in the control, BV, LT, and BCG treated NOD mice were 58%, 21%, 25%, and 17%, respectively. Severity and incidence of insulitis were reduced with the BV, LT and BCG treatment.
Source: https://www.ncbi.nlm.nih.gov/pmc/articles/PMC3054436/

Conclusion
Clinical studies conducted above clearly demonstrate that different types of BV treatment can help the management of insulin in subjects of diabetes. The experiments conducted did not show any sort of side effects. However, further experiments are required to determine the actual effective dose that can be beneficial for diabetes in humans.
Disclaimer: Product statements have not been evaluated by the Food and Drug Administration or their equivalent organization in any country. No product is intended to diagnose, treat, cure or prevent any disease. The information provided does not substitute for, or replace, the advice of a qualified healthcare professional. This site is not intended to provide diagnosis, treatment or medical advice. Products, services, information and other content provided on this site, including information that may be provided on this site directly or by linking to third-party websites are provided for informational purposes only. Please consult with a physician or other healthcare professional regarding any medical or health related diagnosis or treatment options. Read full disclaimer »
© 2008 Apitoxin - Bee Venom Powder - All Rights Reserved.
The statements on this site have not be evaluated by the FDA.